Presenting at a conference, with a baby 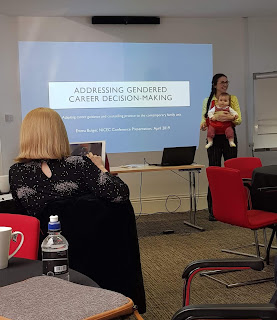 Last month, I took my ten month old baby with me to a conference away from home. It's not common to see a baby accompanying a delegate on the academic conference scene and I had quite a few questions and comments whilst at the conference and more since. For those curious as to how it came to happen, here's how (and why) I did it.


"Did you ask if you could bring her?"

I had a baby less than a year ago, so she comes with me to a lot of work events. She's been seen regularly throughout this academic year, as I returned to work "early" when she was only 3 months old. For the conference "all" I need to do for explicit practicalities was ask the hosting venue for a travel cot and high chair. There were plenty of other logistical issues to navigate.

First of all, I'm not going to suggest bringing your baby with you to a work event is easy or suitable for everyone and every working environment but it has often worked for me and it worked in this instance. It won't always work. They get bigger, and noisier, but believe me, a baby can certainly break the ice and absolutely deliver a bang-on-time sigh when everyone is thinking, "Please no more of this, it's lunchtime."


[...] (What everyone is perhaps thinking but remains unsaid)

Let's discount the alternatives in this specific scenario of an academic conference. Some conferences do offer childcare support, but childcare doesn't work for everyone. This conference didn't offer it and even if it had, a conference creche or ad-hoc nursery place nearby isn't the answer. At the moment, my baby is very attached. It takes her several days to warm to someone enough to let me, her dad or her brother leave her alone in a room with them. A cuddle...don't even go there. We joke she has an "off button" when she's passed back to us, roaring.

Almost before people ask, I feel obliged to mention her older brother in school and the kids' dad, back home, and how we don't have any of these healthy, wealthy, local and time rich grandparents who are flexibly propping up the childcare system for a lot of parents. Did I mention my daughter has never taken a bottle and is only now, two weeks after the conference, even beginning to entertain the concept of a beaker of water? The breastfeeding literature doesn't show women juggling babies around at work, just a cosy room to express milk whilst reading a magazine and baby who cares not who feeds them.


"I left my 10 month old behind for the first time, and I never even thought to bring her."

It's hard now to think of the conference without her being there. She was welcomed and people couldn't have been more helpful or supportive. So many people said it had changed their perceptions. Nobody flapped or fussed. It felt like everyone wanted a cuddle. Not for the first time people mentioned how they wished they had considered doing the same, either now or in the past.

"You're both so relaxed!"

The baby barely grumbled throughout the conference. In fact, I think on a couple occasions, her giving the occasional squeal may have jolted people who had drifted off back into the room. The week after the conference, the last of my daughter's first block of teeth erupted. She was just over a cold. She wasn't, as we might put it, on her "best form." But she was with a parent, someone she knew, someone she felt secure with. As her mother, I wasn't worried about how she was coping with a change in routine or without me for longer-than-usual periods.

The logistics of my actual conference slot are more of a behind the scenes story. It was perfectly planned. To go up last in our panel presentation, meant I had time to judge how the baby was on the day. I put her into her baby carrier in just enough time for her to settle but not to get bored. In all honesty, it wasn't the best presentation I've ever done, but who ever does their best after a day or two of travelling and in a new venue with an unknown audience?

What if it had all gone terribly wrong? What if, after driving 225 miles, she had screamed throughout my session? Well, I had a back-up plan in that I had a "plant" in the audience. Huge thanks to fellow academic-parent Rosie Alexander who volunteered, without question, to be on call if needed because, like so many others, she understood why I was doing it. I had a double back-up plan had Rosie been struck down with an ailment or stranded somewhere en route as she had quite a distance to travel and a convoluted route from Orkney (a friend local to the conference location and a buggy that faces away from the pusher, so the baby doesn't actually know who is pushing her for an hour or so).

And I was prepared for disaster. I had a bag of emergency conference survival supplies passed over to me at our drive-down stop off by Claire Dean. Claire is another academic and recently completed her PhD after a long journey that started when her own boys were little. As she states in the acknowledgement in her thesis, one day maybe her sons will understand why she worked so hard.

The only alternative to taking the baby, for me, in this instance, was not to attend. I did it to prove it can be done. To prove that people don't react negatively, in their masses, when a baby appears. To prove that all babies and all parents' needs are different and can be met in ways outwith expectation. What working parents need are options, and what we all need to do is to put inclusion at the forefront of event planning.
at May 04, 2019

Thank you for posting a comment. I moderate comments to avoid spam so there may be a delay in your comment appearing.